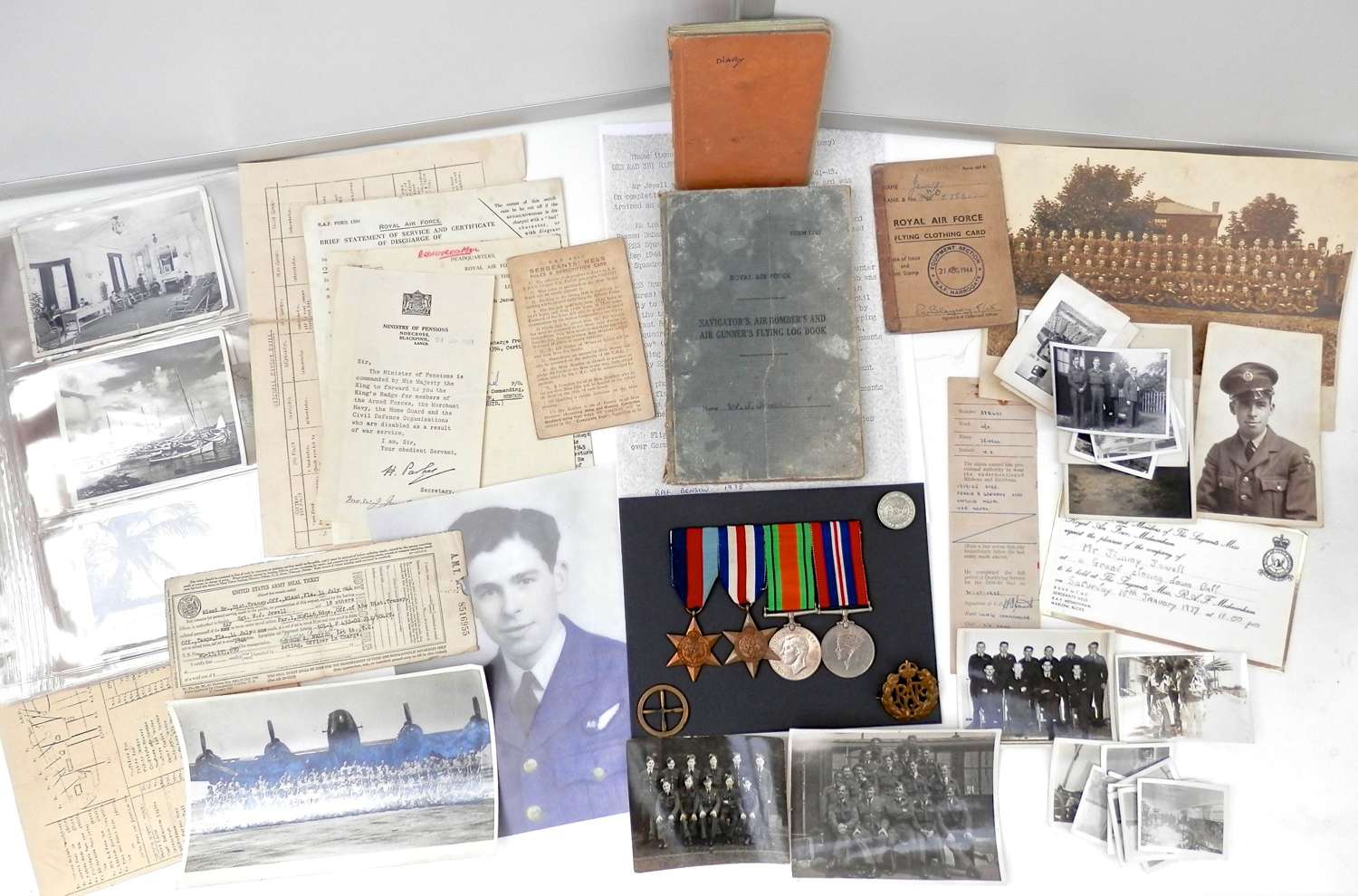 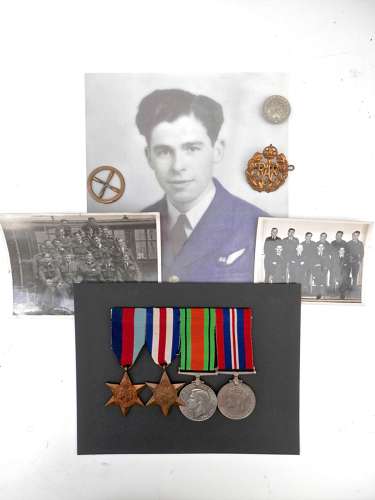 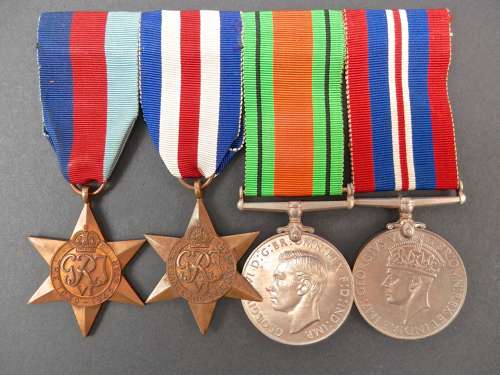 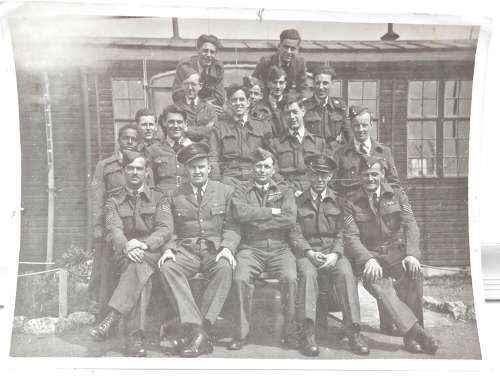 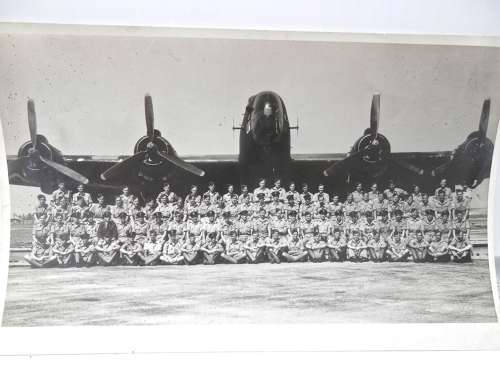 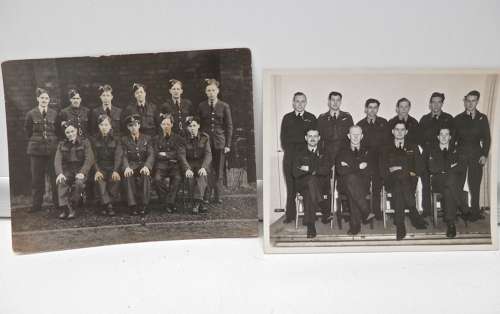 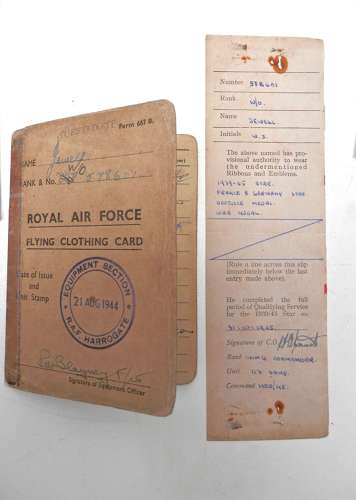 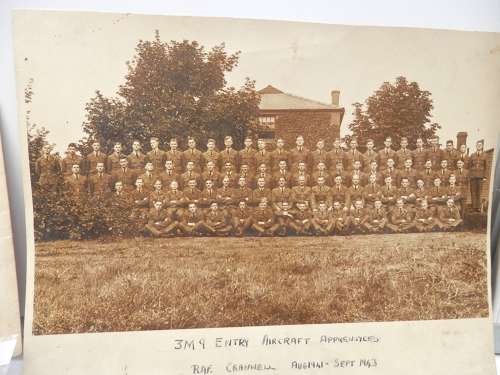 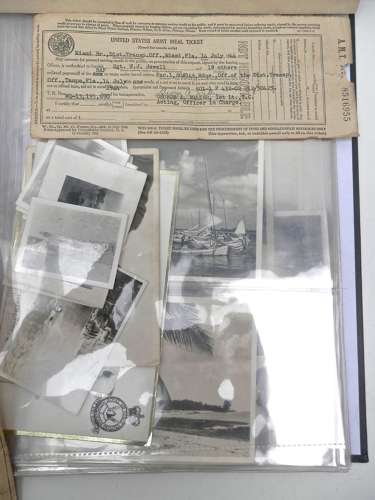 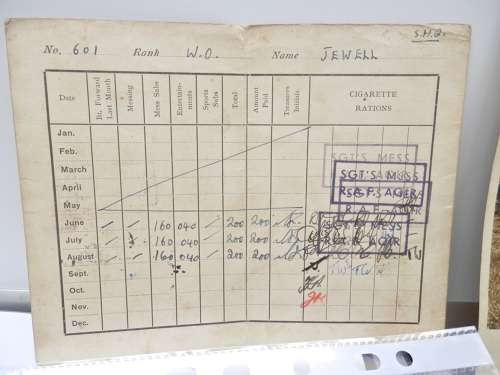 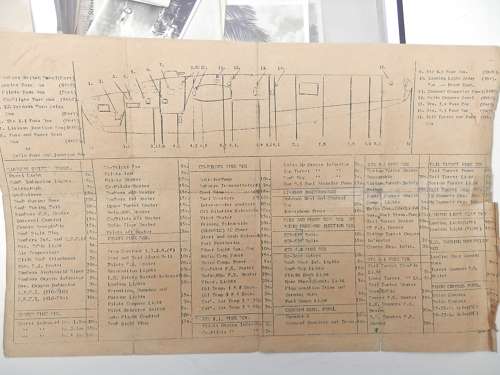 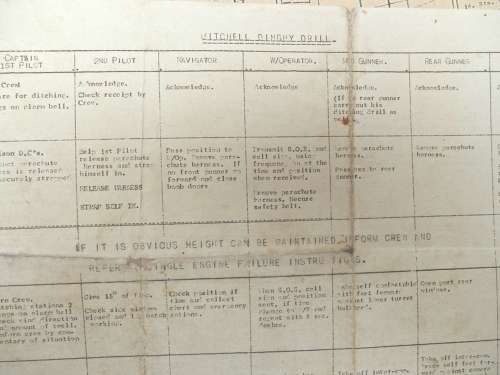 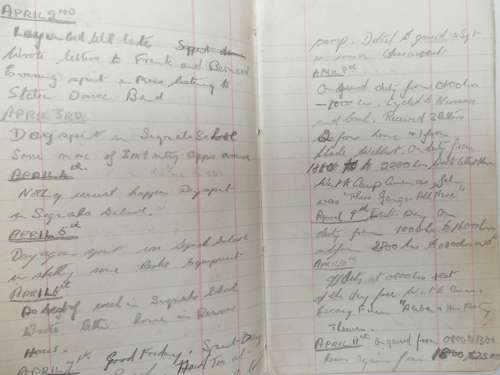 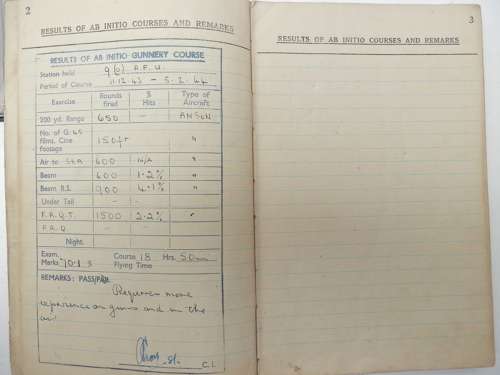 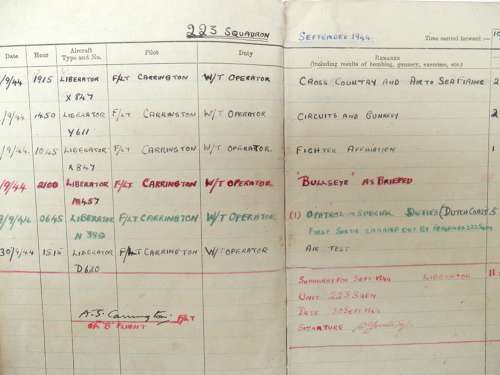 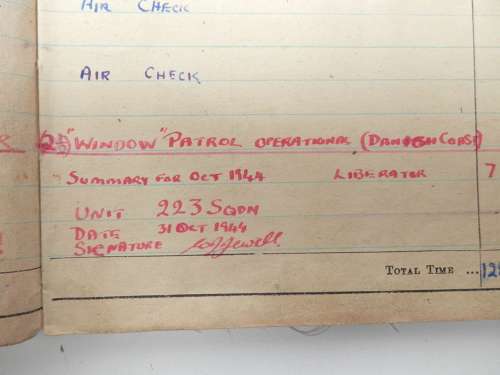 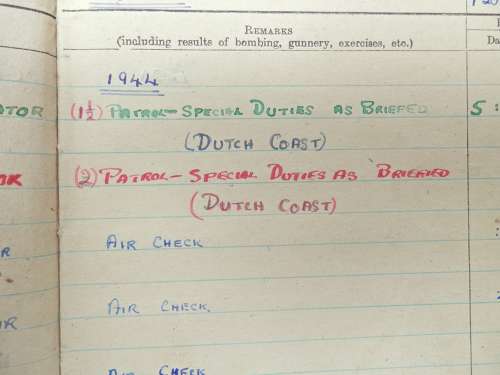 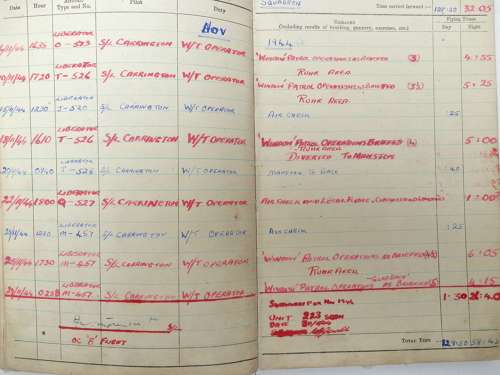 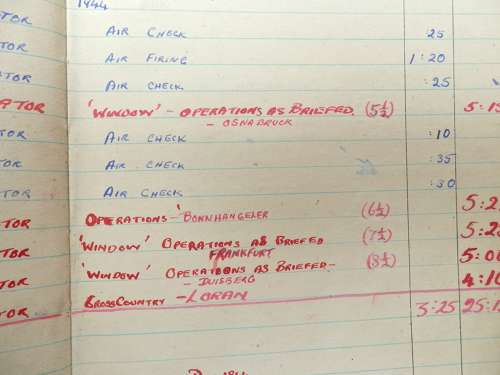 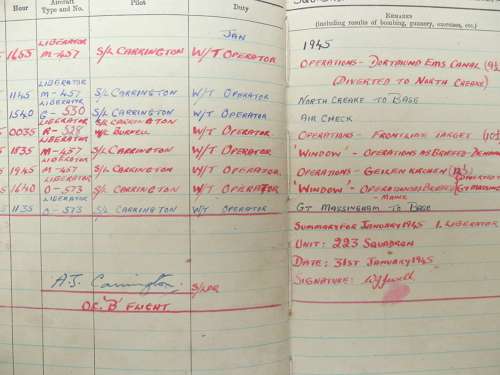 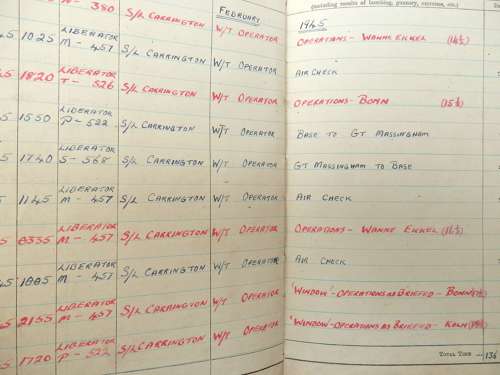 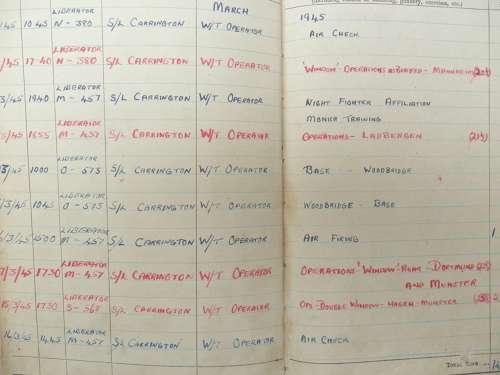 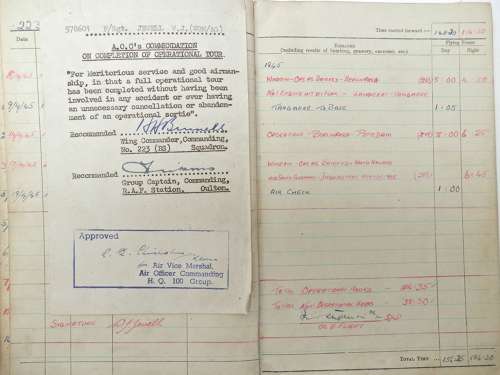 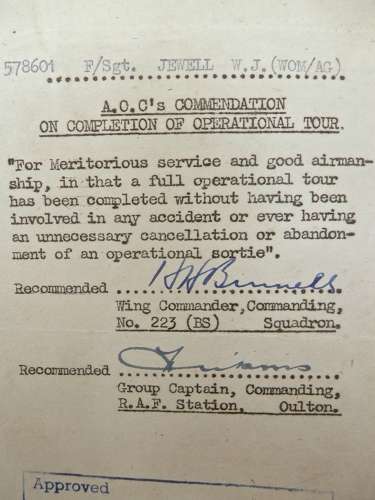 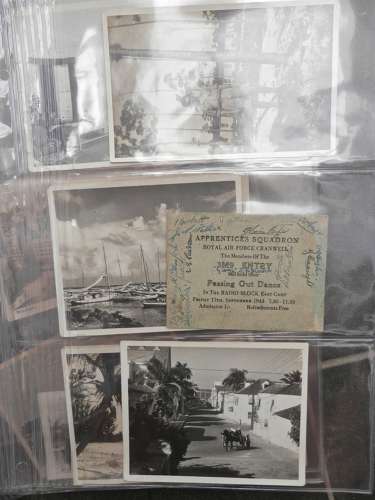 RAF cadet Jewell (Jimmy) was an apprentice at RAF Cranwell during 1941 until 1943. On completion of training he volunteered for aircrew, and trained as a WAG (wireless operator / air gunner). Initially training at 111 OTU, Nassau in the Bahamas (some had it tough !) and on completion he was then posted back to the 'reality and hardships' of RAF bomber command in England. Here he went to RAF 223 squadron flying American built RAF Liberators (B24). On 23 August 1944 the squadron reformed at RAF Oulton, this time as the second 'Jostle' unit in No.100 Group of Bomber Command. The squadron was equipped with a mix of B-24Hs and B-24Js and used these aircraft on Radar Counter Measures and electronic intelligence missions to support Bomber Command's main force. 'Jostle' itself was radar jamming equipment. The B-24 could carry up to thirty jamming sets, and carried two special operators to work the equipment. Their role was 'so secret' that the rest of the crews didn't always know what they were doing! F/Sgt Jewell was one of these special operators. The squadron had the unenviable job of flying to the target with the first bomber stream, and then to remain over the target operating their jamming equipment until the last bomber had left for home. This made each of their operations even more dangerous than the conventional aircrews, with so much time being spent over the target it gave the greater chance of gettng shot down. Another of their jobs was to fly spoof raids, which consisted of dropping 'window' (silver paper strips) away from the main target area to confuse the enemy radar. Some of the radio jamming equipment used by 223 squadron was code named - 'Jostle' 'Piperack' and 'Carpet'.

Flight sergeant Jewell completed an amazing 'full tour' of operations over Germany and occupied Europe between September 1944 and April 1945. These are entered in his logbook starting with a Special Duties operation to the Dutch coast on 19th September 1944. This was followed by two further special operations to the Dutch coast and one to the Danish coast. November 1944 saw four 'Window' operations to the Ruhr, and finally Gladbach. December, more 'window' and RCM operations to Onsabruck, Bonnhangeler, Frankfurt, Duisberg, Loran. The new year saw RCM and Window operations to Dortmund Ems canal, Denmark, Mainz, Gelsenkirchen. RCM operations in February to Wanne Eickel (2), Bonn (2) Koln and the Danish coast. During March 45, operations to Mannheim, Ladbergen, Dortmund, Munster(2), Kassel, Wesel. April saw him finish his tour with RCM and Window operations to Berlin (returned on 3 engines after being hit by Flak) then Berlin again, North Holland, and a final operation to Ingoldstadt airfield. At the end of his tour he was awarded the A.O.C's commendation, which is found pasted into his logbook (see photos).

His grouping consists of - Logbook which is about a third full of entries (the cover is tatty) his bar mounted medal group of four and medal entitlement slip, badges, flying clothing card, Sgt's mess card, a good quantity of photographs (at least 40) which include his flight crew also his training at Cranwell (portrait of him in uniform, with badge which is included ) and also in the Bahamas, an original Liberator fuse diagram, Mitchell dinghy drill form, personal diary with entries, multi signed Cranwell apprentices passing out dance ticket, identification card (transport command) RAF certificate of Service, various ephemera and some research, obituary, etc.......comes in a ring binder.

An excellent and rare grouping to a very brave airman.